Hey initiates, #13 here. In early October I took a three-day road trip around the great state of West Virginia, where I visited some sites that may be familiar to you from some of our previous episodes.

(The museum also has some interesting displays about local history and industry, including one on Marx Toys, maker of Rock’em Sock’em Robots and Big Wheels.)

The real attraction, of course, is the mound itself. Alas, you can’t go into it the way you could back in the 1800s but it’s still a rather impressive structure and you can walk right up to the top. The summit also happens to be the highest point in Moundsville, so you can get a great view of the city and the Ohio River. (And also the drab and imposing shell of the old West Virginia State Penitentiary next door.)

The next stop was Point Pleasant, where I took in all the obligatory Mothman stuff. The statue is neat enough, but the adjacent Mothman Museum is a let-down, basically just a gift shop attached to a small amount of memorabilia. If you didn’t know anything about the Mothman before your visit, you wouldn’t be any more enlightened afterwards.

Fortunately right across the street from the Mothman statue is Tu-Endie-Wei State Park, the site of the only major engagement of Lord Dunmore’s War, the Battle of Point Pleasant (which you may remember from “He Whooped To See Them Burn”). There’s a lot to see there, including the grave of legendary frontierswoman “Mad” Anne Bailey, a big mural showing the statue in stages, statues of notable combatants in the style of little tin soldiers, and this rather impressive obelisk. There was some sort of historical reenactment going on during my visit… which I had just missed the end of. D’oh.

The plaque on the statue, though… yeesh. “The most important battle ever waged between the forces of civilization and of barbarism in America?” Might be time to consider replacing that plaque, West virginia.

Okay, there’s nothing historic about this, but half of the fun of a road trip is doing things like eating (really good) chili dogs in a refurbished school bus in the shadow of a giant fiberglass chili dog. Did I mention that the chili dogs were delicious?

The next day was spent meandering along the southern border of the state and taking in its labor history and natural beauty. There were fewer sites with specific ties to episodes, but occasionally I would run into something like this, the Coal House in Williamson. The tie here is that barely visible statue at the very left — that’s Chief Logan, one of the Native Americans on the other side of Lord Dunmore’s war. For his bravery and integrity he has been commemorated in statue form… and condemned to stare across main street at a run-down parking garage.

Of course, this area of the country is also Hatfield and McCoy territory, and I kept stumbling across sites and historic markers and just had to check them out. (And before anyone pushes up their glasses to “Um, Actually” me, these sites are technically in Kentucky.)

And of course, what’s a road trip without tourist traps? In this case, the Mystery Hole at Eagle’s Nest, near Anstead.

Day three, of course, was the whole damn reason for the trip in the first place: a visit to Flatwoods, once a remote mountain town and now an easily accessible rest stop off of I-79. As you can tell, the residents are more than a little proud of their monster.

Their primary concession to tourists are these “chairs” which they erected a few years ago, at locations throughout the town. They’re all just a little bit different: some are angry, some are friendly, some are more humanlike than others. The one at the high school athletic field has the high school logo on its chest. Apparently if you visit all five you can get a sticker. (I missed two — one was down a gravel road I didn’t feel like driving down, and the other looked like it was on private property and I didn’t want to trespass.)

Most of the area where the encounter took place is still private property, so I didn’t check it out.

Finally, down WV-4 in Sutton there’s the Flatwoods Monster Museum. It’s a lot like the Mothman Museum, but it has three things that give it a leg up on its Point Pleasant counterpart. First, it’s free. Second, it has a pressed penny machine. And third, the tee shirts and merch are a lot better. 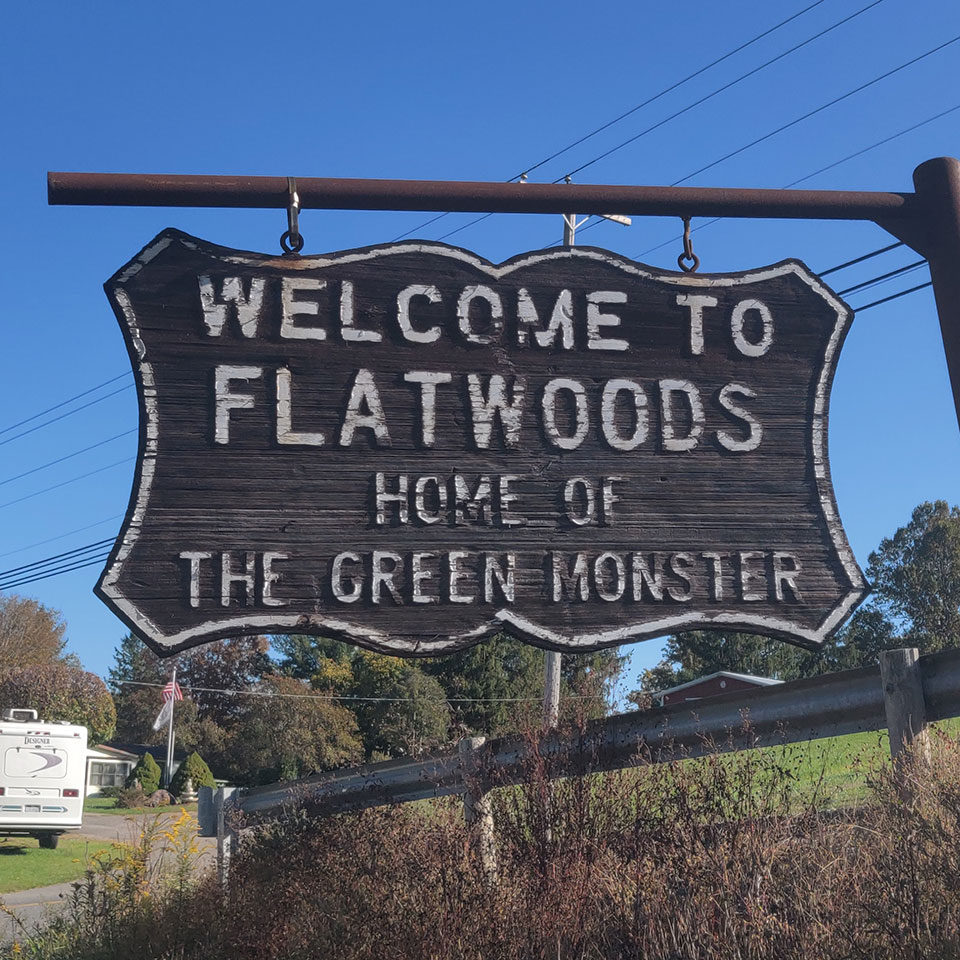 In October, #13 took a road trip to visit some podcast-related sites in West Virginia. 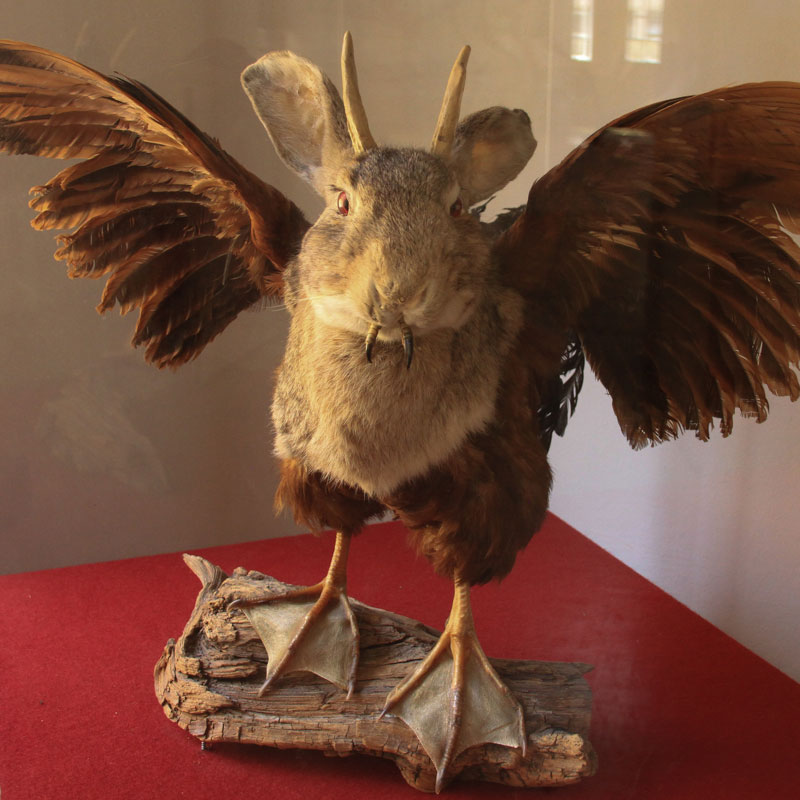 Back in July, #42 sent us a some cool photos of the jackalope's wild and weird Bavarian cousin, the wolpertinger. 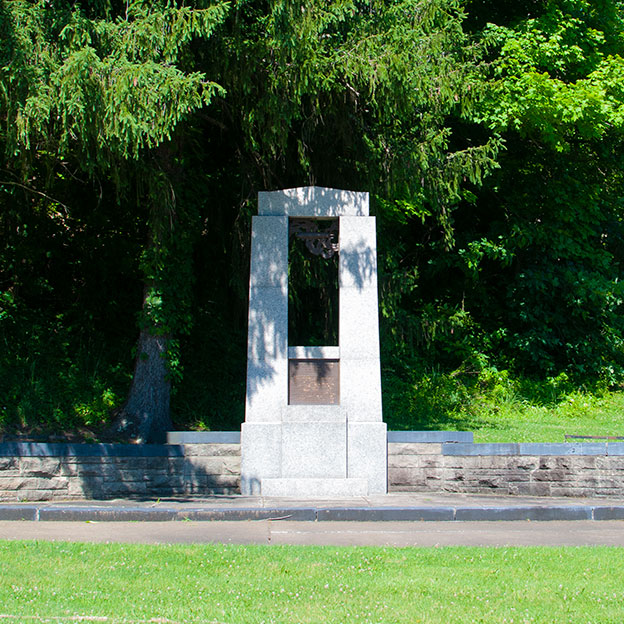 On the way home from Road Trip 2022, #7 and #13 took a detour to visit the monument to the USS Shenandoah disaster in Ava, OH.